Recently, I’ve come up with a great idea to track all of the places that I’ll be going to, and where and what I’m eating. Most recently I’ve travelled to Tuscaloosa, AL to call the Auburn at Alabama game. When I asked about a place that I “MUST” visit, I was directed to Chuck’s Fish around the corner from my hotel.

It was a awesome experience and the food was great! When I first arrived, I let the Chef Dennis know that I was from out of town, but I wanted him to pick some items that would be something that I would remember. We went with sushi, and I was not disappointed!! 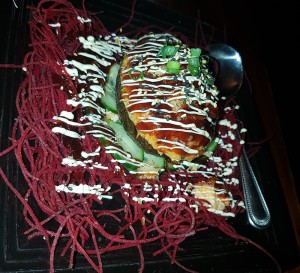 The appetizer was a Baked Seafood Avocado. I’m not normally adventurous, but I figured you know what… what the heck- you only live once. It was shrimp, crab (normally has some bacon too, but I don’t eat pork) and a mix with spicy mayo all stuffed into an avocado. The dish was then baked and topped with eel sauce and some crunch on top. It came on a bed of beet straws and cucumber.

After this, I was ready for the main course. Dennis selected the Red Light District which was a favorite to guests in the restaurant. It was shrimp tempura with green onion, rolled and topped with crab and spicy mayo. They baked it in the oven, topped it with some eel sauce and voila… yumminess in a roll!!

I was feeling good when I finished the two dishes and about ready to pack it in when he said that I couldn’t leave without the best dessert in the city. Well… I had to go ahead and try it. They brought out the Sunday Bread Pudding with some vanilla ice cream. Everything in the restaurant is homemade and made in house. So, you know it was ABSOLUTELY amazing!! I ate every ounce of it, and would’ve licked the bowl if I could LOL.

So, big shoutout to coach Shereka Wright on the recommendation to Chuck’s Fish! I’ll definitely hit it up again when I’m back in Tuscaloosa. Thanks Chef Dennis and Chuck’s Fish for being awesome to work/eat with : )

Until the next city… God Bless!